Early in April, I sat down with Mike Giordano and Nick Mitch, who just opened up a comic book shop on Broadway in Astoria. Below are some excerpts from that conversation.

Lisa: What made you decide to open up a comic shop in Astoria?

Mike: Well, we come from Forest Hills—we’re established there about 25 years. And Nick, local to Astoria approached me and said he’s tired of spending three hours to come see us over at Forest Hills, and he said maybe we’ll give it a go over here. Found us a reasonable place—Nick, whatya gotta say?

Nick: That’s kinda how it went. I was tired of going out to Forest Hills—and more importantly was that there were so many days that I wanted to go to Forest Hills, go to the shop, and I just couldn’t get there. And then I’d look at my watch and it’d be six o’clock or whatever, and I knew they were closing—it is, it’s three hours. You know, a half hour there, a half hour back, and then at least an hour or two in the store. And it would take up a whole afternoon.

And there was nothing around here, or close to here that resembled anything like Royal Collectibles Forest Hills. The people—not just the products—the people. The products in the store you can get online, there’s a million places you can do this. But the interaction with the people—his entire staff there, it’s a family. You feel it. You feel that vibe. You ask a question, they help you. They’re honest. I’ve been around a long time—I’ve been in this game for years—go back to beanie babies and cabbage patch kids. It’s very rare you find honest, truly honest dealers. Honest people. Everyone’s out for a quick buck in the moment—and I’ve seen it in all kinds of collectibles. And I’ve never felt that at Royal Collectibles with Forest Hills. I always felt that I got a fair deal, if not a good deal. I felt that I always walked away with some information that I didn’t know going in.

I said to Mike, just in conversation—if you ever think about expanding Royal’s name, why don’t you come closer to us—come west! And go to like Astoria or Long Island City, or whatever. And he just kind of said, “yeah,” and then a few months later, he said to me—“would you be interested?” And I said, “Well, yeah—yeah, okay.” A friend—another friend of ours—another person, who’s not here, Joe, between Joe and I we have a massive collection of vintage comic books and toys that you see here—and he said “Yeah, you know—why not?” I’m 55 years old—why not try a new adventure? Something different in life? 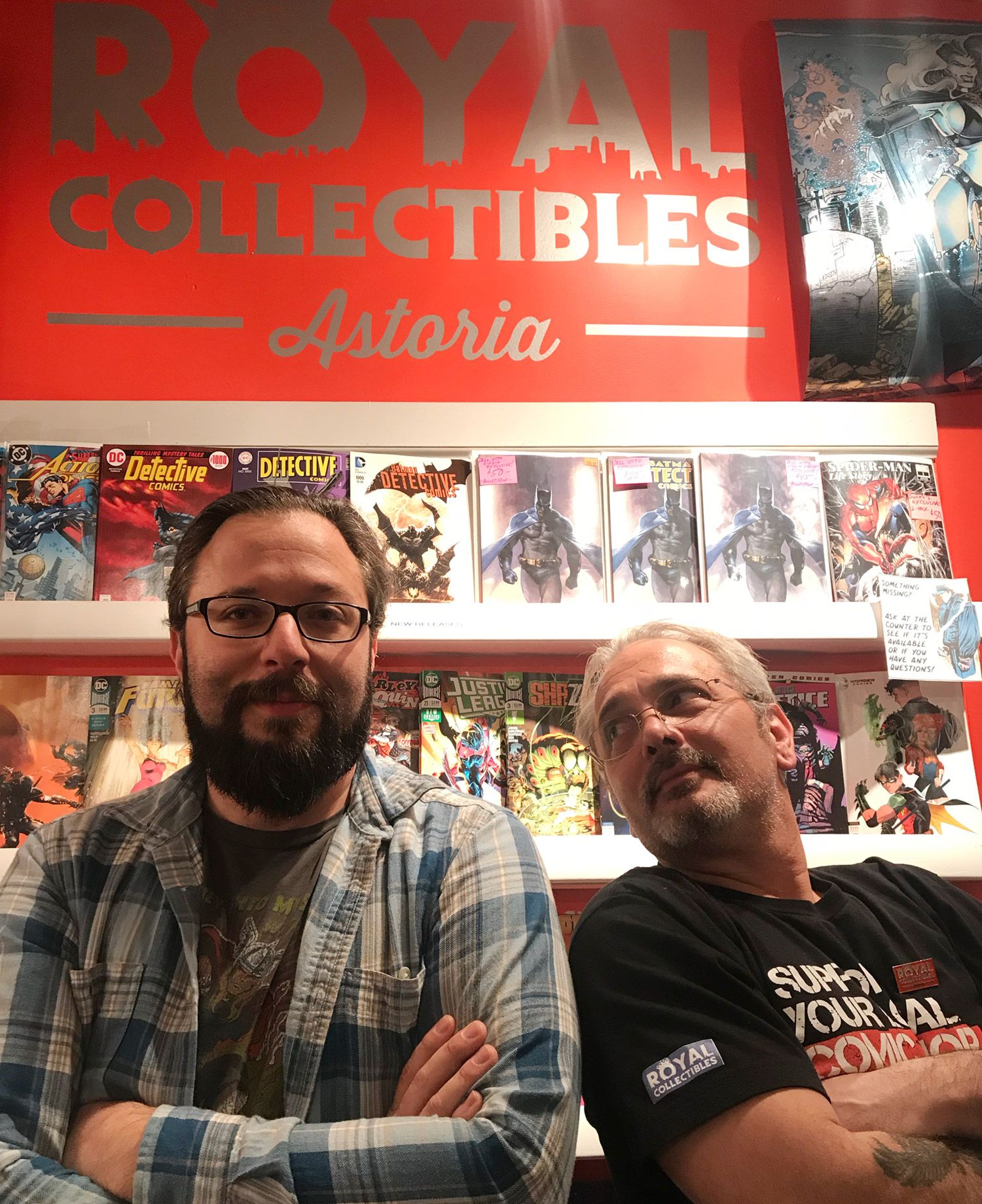 So what made you decide that a comic book shop in 2019 was the right move for Astoria? Because I know I’ve been reading about comic book shops closing all over the city—why did you think this was a smart decision, especially for Astoria, for now?

Nick: I’m gonna start, and then you can finish it. On the start that we have enough gourmet delis, we have enough coffee shops, we have enough cafes, we have enough hookah bars—we needed something different. And you’re right: a lot of places are closing, and it’s scary as hell—and I can tell you how many sleepless nights I have had, and how many nightmares I’ve woken to. And the fear that’s existed—however, with the support of some very close friends, and with the support of Mike, and his staff, this was a good time to do it—while it may seem you know economy-wise, things are crazy—you know worried about jobs or whatever and collectibles and toys and comics—people still need their escapes. They still need their entertainment. They still need to live their fantasy life, which we all live—I do too. I have my particular things I like. So while it’s risky—and trust me, it is risky, and it is scary—on the other side of it, there’s still a need for it. People still want—we get people who walk by the store and you can hear them with the door open saying, “Wow! A comic book shop opened! We gotta go in!” I’ve had people come and say, “I just wanted to step in for a minute, I gotta run, but I’ll be back—we’re so glad that you opened.” And so when you get that kind of return—you did something right. I’ll leave it to you.

Mike: Yeah, it’s what Nick said—it’s escapism, it’s enjoyment. It’s a little break from the everyday. Everyone works hard—and they get some enjoyment out of these stories of these characters. Or whatever it is, whether they’re collecting—Funko Pops and action figures—it’s a little respite from all the rest. Whether the economy’s doing well or not, good times and bad, people still need the ability to just kind of check out and enjoy themselves I think.

Nick: Right. So my personal taste when someone comes in, when I see Batman, Detective Comics like that, that’s what I am gonna point to. I’m also a big Rick and Morty fan—I love the animation, I love the cartoon, I’ve watched it from day 1 from its premiere—so I’m gonna point to that. The other thing is, I’m a big Walking Dead fan. I’m a big Todd McFarland fan. I love Spawn. So those are kind of personal things—so usually what I’ll do is I’ll ask them, “What is it that you like? Like, do you want a superhero, or for me like Batman—he’s like, a regular guy who has a bunch of neat gadgets who takes care of the bad guys and keeps us all safe. Or do you want someone like Superman, who is from another planet and is invincible? Or do you want”—Mike mentioned Spider-man—“Do you want something—and Stan Lee was famous for this—a created superhero. Radioactive spider bit you or you got exposed to gamma rays”—it was always radiation involved by the way if you notice in the 70s—

Mike: It was the atomic age, yeah—

Nick: It’s a very common theme—everything that changed somebody into something supernatural happened because of radiation exposure.

So usually I’ll ask somebody what their kind of interests are, and then I’ll kind of direct them. And there’s stuff that’s “hot,” and I’ll be clueless, and usually that’s when I reach out to Mike or to Bob over in Forest Hills—that’s one of the other guys—and he reads everything, and I’ll say “Bob, I have a customer and I’m not sure what to tell ’em and they’re asking for this—what do I do?” And Bob will say “ABCD” and guarantee that person’s happy.

Mike: It’s so vast. I mean, there’s something for everybody in comic books.

Mike: Yeah, there’s 120-something new releases every month. You want to get into reality and you want hard-edged crime stuff, that’s there. And I go to TV—if someone just wants to get into comics, never picked up a comic ever, I’ll tap ’em for what kind of TV and movies do you like? You watching Westworld? I’ll find you a sci-fi futuristic Western story. You know, they’re there.

Nick: What would you recommend to someone though, who wanted to get in—let’s say 14-year-old, 15-year-old kid, comes in and just has never read a comic. And really doesn’t have any direction—what would you be your—

Mike: Just to put something in somebody’s hand?

Nick: It’s an art form too! And that’s partly what’s driven it—is that this has finally become recognized mainstream. You cannot deny—whether you agree or not that this does not take talent to draw, and to color, and to ink and all that. Back in those days, when you see those early editions—no, not so much. This was for kids.

Mike: This stuff has gotten a little more sophisticated over the years.

Mike: In fact it’s mostly, I would say, is made towards adults. They’ve got a clear handle on the market—they’ve divvied it up. They make a whole DC, Marvel, Image—they make whole lines of comics geared toward kids like 12 and under. They hit those age groups. Most every mainstream—you know new titles come out every week for an adult readership.

Nick: And so back to the question—

Mike: You’ve got to go with the all-time greats—you know those top ten all time like the best of the best—Frank Miller’s Dark Knight Returns, Watchmen, the greatest hits, Spidey, Kraven’s Last Hunt. There’s a ton of Batman stories—Walking Dead.

Nick: It’s vast. And there is literally something for everyone. I’m going to steal a cliché from Bob—he said I could steal it—he said that comics is the gateway drug to literacy. I love that saying—I was like, right on!

Mike: And we get that from parents all the time. Their kid now just got hooked on reading because of comics. Some kids just don’t respond well to school and being told you gotta read this, you gotta read that. Something captures their imagination and their interest—and they’re ravenous for it. They’re gonna eat it up. And then you’re gonna move them along to books that don’t have pictures.

Nick: I started reading comics as a little kid. And when I became a teenager—let’s say 11, 12 years old—one of the first two books I read—Pardon Me You’re Stepping on My Eyeball by Dewey Daniels is one, and the second one was A Hero Ain’t Nothin But a Sandwich. And those two books—they were young books, got kids of that age—no pictures. No nothing. From comics, I got the imagination to visualize in my head. And I can’t tell every time I’ve bought a book that’s really engrossed me and read it cover to cover. And that all came from this—from comics. Because it was foundational to my reading.  And most people I know that read comics—and I know to some people it may seem childish—they’re some of the most intelligent people I’ve ever met. Most people I know that read comics have such command of the English language—Bob is one of them. I tell him he has a PhD as a wordsmith. Because he does—it expands you in a way that’s not tangible, that you don’t realize at the time, you don’t see it you can call it a liminal effect if you want, but it does. It does expand your ability to think, to imagine, to dream, and isn’t that what it’s all about? Guys like Edison as smart as he was, you don’t think that he didn’t dream about his light bulb and all that stuff? That ability to dream—that’s it, that’s everything, and that comes from this. It’s certainly a starting point. 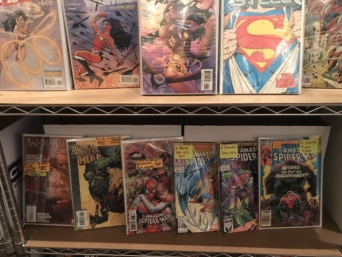 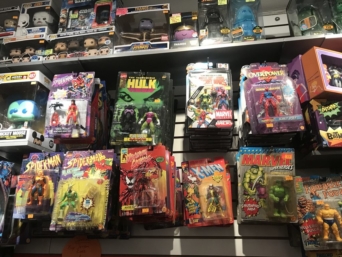