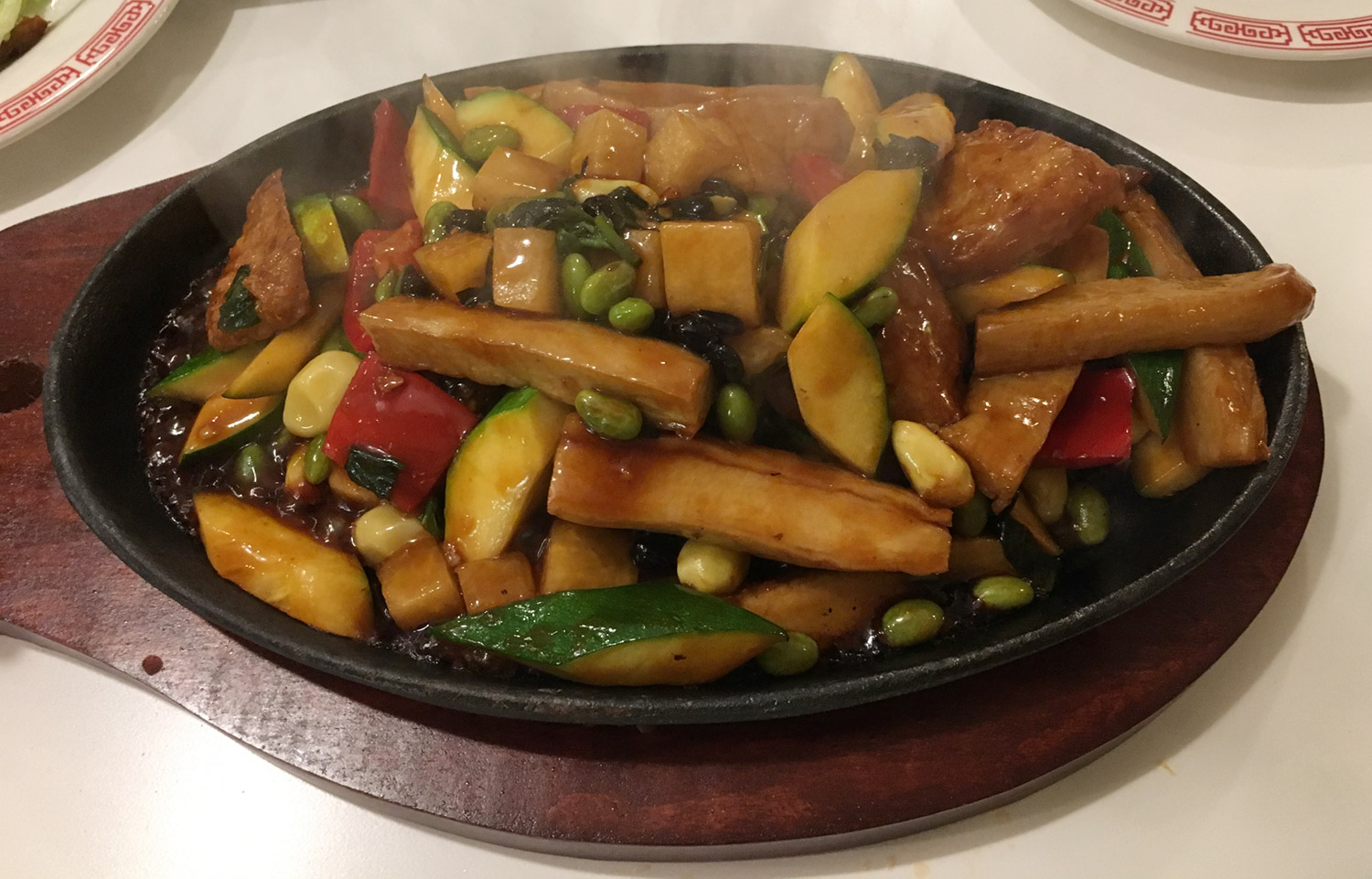 Vegetarian Asian restaurants have always been magical places to me.

I’ve been on a plant-based diet my whole life, and while normally I am exiled to a tiny box at the back of a menu, it’s liberating when I get to have a whole menu at my disposal. When I get to bask in the fancy-looking, theatrically plated dishes instead of the same old Buddha’s Delight every single time.

Which is why I was so excited walking home a few weeks ago and I saw a sign for Veggie Lin Garden, a new vegan Chinese restaurant just a few steps from my subway stop. While I wouldn’t trade the food scene in Astoria for the world, there aren’t a ton of places around here that have more than one or two decent vegetarian (let alone vegan) entrée options, so I was excited to see a newcomer to the neighborhood and check it out with Jonah.

As we ordered and took in the simple, tasteful décor of teal and artificial plant life, we sipped on hot tea and munched on a tiny tray of pickled veggies.

We started with the barbecue veggie ribs, which weren’t super rib-like visually, but had a nice barbecue flavor full of sweet umami notes. I liked the taste, but the tiny chunks made them a bit challenging to eat.

But the starter that really impressed me was the wonton soup, the sort of thing that I usually never get to enjoy at most Chinese restaurants, as wontons are usually stuffed with pork swimming in a chicken broth. The broth here was extremely flavorful without being overly salty, and the soy protein and veggie-filled dumplings were deliciously delicate. I can definitely see myself returning for this on a rainy day, along with their vast array of other soup offerings, including pumpkin and veggie shark fin.

Remember when I told you I loved being able to order the fancy-looking dishes? I was utterly not prepared for the entrance Mango Madness, which was served with two halves of a hollowed out mango as a garnish that formed a sort of crown around a mixture of soy chicken, peppers, peas, and mango. The Sizzling King Oyster Mushrooms also made a pretty dazzling first impression, with steam wafting up from the hot skillet.

What I appreciated about both entrees was that the sauces were flavorful, but they didn’t overwhelm the delicately cooked veggies. The juicy discs of mango contrasted nicely with the denser, chewy mock chicken pieces. The oyster mushrooms of the other dish were a pleasant surprise. Typically when I eat oyster mushrooms, they are mainly the thin, delicate ones with floppy tops. These on the other hand, were the larger, king trumpet variety, with a large stem that here cut into thick, soft wedges that, when cooked, took on a pleasant, rubbery texture that I understand is close to seafood (I only know this because I once used them to make vegan clam chowder). The other fun textural surprise in the mushroom dish were crunchy little chunks of jicama.

This visit we both got entrees involving mock chicken but I look forward to seeing their take on mock duck, seitan beef and veggie prawns. And honestly, I loved their veggies so much I may just skip the fake meat all together next round. The one frustration I have at a lot of these vegetarian Chinese places like Buddha Bodai and others is that the sweet, oily sauces and the proteins can get a bit overwhelming, and I leave feeling bloated and in a food coma. The dishes here had lighter and fresher, and yet still filling and substantial. As a Midwesterner, I was happy to see hearty portions, more than enough to share or bring to work as leftovers the next day.

Overall, great first impression, and welcome to the neighborhood! 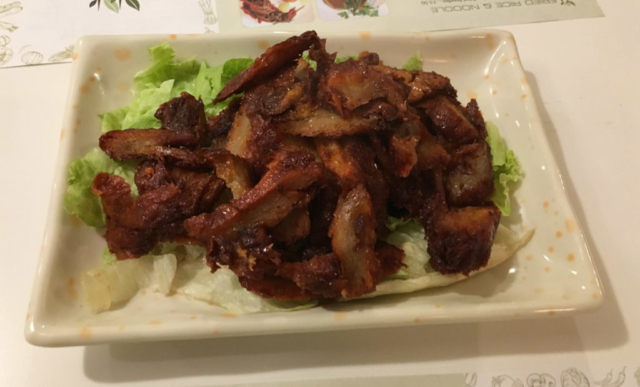 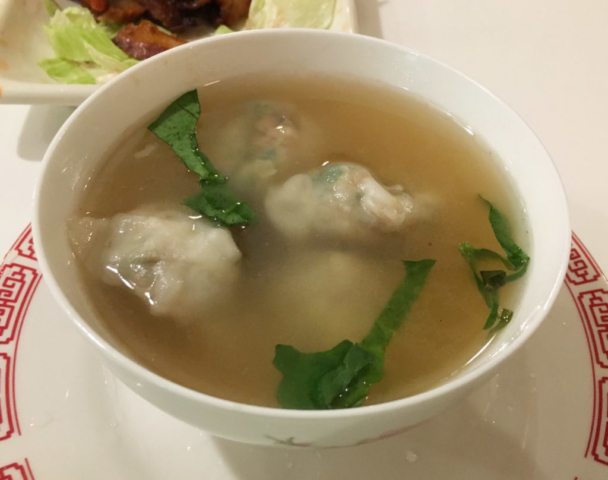 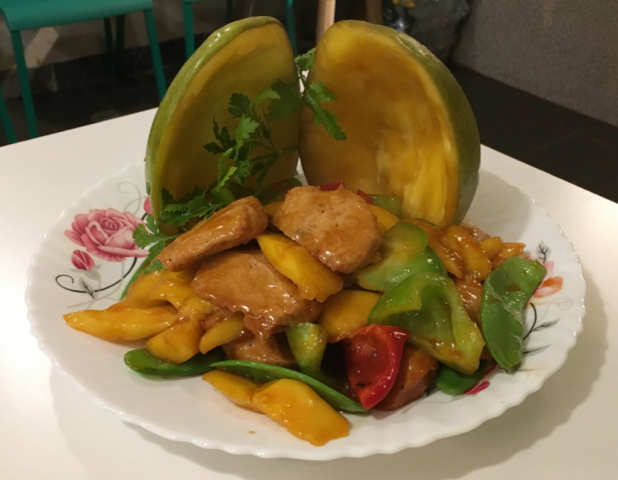 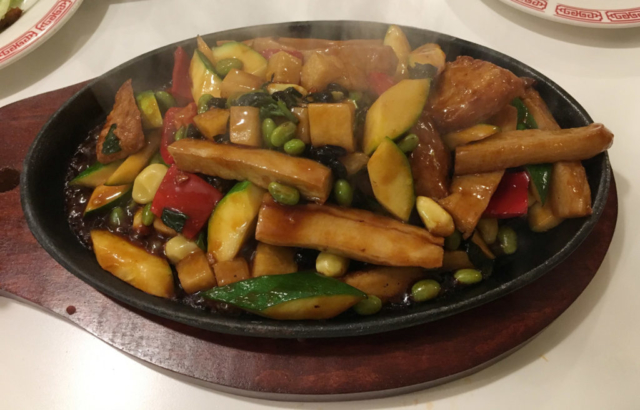