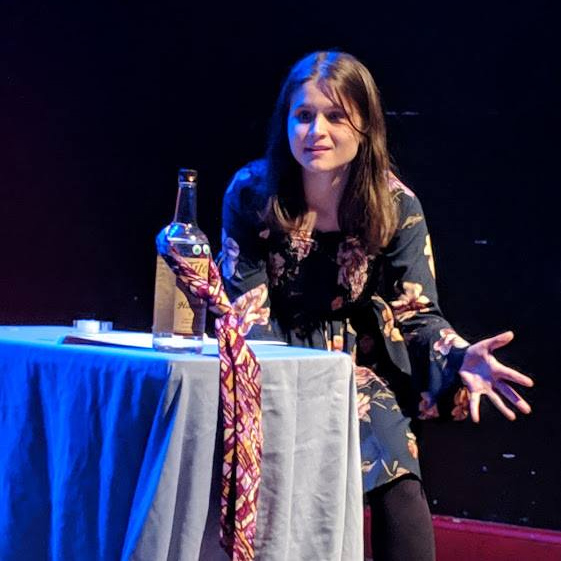 Michelle Drozdick in “Message in a Bottle.” Photo by Melissa Parker Caron

It’s not easy breaking free of a toxic relationship—whether it’s a bad boyfriend or a googly-eyed bottle of vodka named Tito.

Comedian Michelle Drozdick confronts this challenge in her solo show, “Message in a Bottle.” Coming off well-received appearances at SOLOCOM 2018, The Pit, HACPAC and Smush Gallery, Drozdick will present her show at QED August 18-20.

Drozdick describes the show as a “surreal but true love story between a woman and a bottle of vodka, from the early days of awkward first love to the ultimate betrayal, and the realization that life going forward isn’t just doable, it can be beautiful.”

BOAST writer Lisa Huberman sat down with Drozdick to discuss the evolution of the show, and what she is looking forward to about bringing it to QED.

Lisa Huberman: What was the initial inspiration for the show? Did you always conceive of it as a solo piece?
Michelle Drozdick: I wanted to put together a show that was equal parts comedy and drama, without sacrificing one for the other, as well as a way to tell my own story quitting drinking in an engaging, unique way… so I wrote a play about a woman dating a bottle of vodka named Tito. It’s always been a solo piece, yes—I did briefly consider how it would work if other people were added, but at heart it’s a show about that relationship, and I think it works best when it’s just the two of them.

How has the show evolved since you first began performing it in 2018? How have you evolved as a performer?
Every time I do this show, something new happens that I end up incorporating! Often it’s a spur of the moment thing that gets a big reaction, like a throwaway line or facial expression during an otherwise serious moment. I’m definitely more confident than I was since I started doing this show—the first performances were absolutely nerve-wracking, and although I’m still incredibly nervous before hitting the stage each and every time I have much more belief in my abilities than when I started.

You come from an improv background. Is the process of performing your solo show different from improv?
It really is. With improv there’s no pressure—it’s comedy, and you’re making it all up on the spot. With this show, it’s a heavy, dark dramatic comedy based on real life, and it was written and planned well in advance. There’s a lot more preparation that goes into it, but every script revision and time spent agonizing over exactly the right line structure or delivery is so worth it.

There are some similarities to improv, though! Although this show is scripted, I do allow for variations. Each show is different, and a lot of these changes end up making their way into the script. It’s a really unique and fun experience to get to use that improv background in a new, rewarding way.

What is the scariest part about performing a show this personal? What’s the most exhilarating part?
It’s absolutely terrifying to go over some of the darker moments of my life, especially when people I know are watching! The concept of the show is surreal, but the events that unfold are very true to life. Doing this show with my mother and stepfather in the audience was probably the scariest thing I’ve ever done—and I’m so glad I did it.

So many things about it are exhilarating. Getting to take something incredibly painful and slap googly eyes, plastic forks for arms, and a necktie on it then laugh at it has been so amazingly empowering. Getting to talk to audience members afterwards and have so many people confide in me their own stories, past and present, is something I never imagined would happen, and I’m so grateful to be trusted in that way. Although it’s a personal show, I’ve found that more than anything it’s reminded me (and hopefully others!) that no one is truly alone, and more people may understand what you’re going through than you’d realize.

How does audience impact your experience? What are you looking for them to take away from your show?
I am so grateful and honored to share this show, and their presence and interest in taking in this story means the world to me! Although it’s a play that has no audience interaction, the unspoken relationship between myself and the audience while I’m onstage is something hard to describe. It’s such an intense, personal show that by the time it’s done I feel as though we’re all friends, even if we’ve never met.

The message I most want to be taken away from this show is that you aren’t alone. That it is so easy to be consumed by whatever your “Tito” is, whether it’s alcohol or not, and believe you’ll never break free from it—and that you can. I also hope to make at least a few people laugh while I’m at it!

Why are you most looking forward to performing at QED? How do you think performing at QED will be different than other venues?
I absolutely love QED. It’s such a great space, and I’m looking forward to the difference in staging it compared with other venues. I’ve put this show up at large theaters, at small galleries, and everywhere in between. Every place has a different vibe, and QED’s is so relaxed and friendly (though I can honestly say that about everywhere I’ve put up the show so far!). On a practical note, it’s also fairly close to where I live, so I don’t have to lug my backpack of props too far.

What have you learned about yourself from this process? Has your relationship with Tito changed over the course of your work together?
I’ve learned I am capable of much more than I would have given myself credit for—though I’m still always learning and growing! And my relationship with Tito has changed, quite a bit actually. Before this show, my past was something I tried not to think about, and my memory of Tito was of something terrifying, shame-inducing, and almost overwhelming at times. Now when I think of him, I think of something much more small and almost pathetic. Instead of thinking about the embarrassing situations I put myself in because of him, I think of how he’s long gone, and how kicking him out made my life so much more beautiful.