In between the game show rounds, Truth Serum highlights a wide variety of stand-up and sketch comedy. On the one side of the spectrum was Jack Pinsky telling jokes about awkwardly trying to sell a “g” of drugs in New Jersey, but unsure of whether that stood for a gram or a gallon, whereas as Aaron LaRoche’s deadpan served as a vehicle for jokes that riffed on how to avoid getting shot by the police, dead black fathers, and the sexual assault allegations against Morgan Freeman. The sketch troupe Mortals featured a dead-beat dad trying to impress his daughter by coming to her birthday party as “blender man” and a woman getting hit on by an HR rep while launching a #MeToo complaint.

I sat down with Yellen to learn more about the evolution of the show and what she loves about hosting shows in Astoria. Below are highlights from our conversation.

How long have been doing this show?
I started Truth Serum about two and a half years ago, but when I originally started, it was a talk show. It was me and one other person, and what we would do is it would be like a drinking game and casually get drunker…I would have one guest, and we would start out the beginning, we’d take a shot. And then there were certain rules to drinking, and basically the idea was that it would start out with kind of easy get to know you questions, and as we drank more it would get a little more ridiculous and a little more revealing. And in between the rounds I would have improv and stuff—and that was honestly mainly to get people there. At this point in this version of it, I feel like game shows need a break in between. I like having standup in between because it’s kind of like a palate cleanser. And so I did the talk show version of it for a while, and honestly it was just too much drinking….and it was podcast for a while. I’ve been doing it at Q.E.D. in this form since September or December.

And what’s your favorite part about working with Q.E.D.?
I like that they’re a community spot. First off, I love that it’s a 15-minute walk from my apartment. But even more than that, I love that it’s like—a lot of the people there and a lot of the shows are people from here, doing it for people here. I go here all the time for local events. So it feels almost like a home.

And how did you get into standup?
I started doing standup in college. I have since then not really done it very much because it is very time-consuming and I’d rather focus on other things. I just don’t think I am good enough to do it every so often. And then I started doing improv, and now I do sketch comedy and I like hosting, because it’s almost like the same high that standup gives you, but I don’t have to create a set, I can kind of just be myself and present something.

What do you think makes this show unique?
I’ve never seen anything like it—it’s something that I started cause I thought it was fun, and other people thought it was fun, and I just kind of kept doing it. It’s just kind of like a bunch of people hanging out and being loud and drunk together—but in a contained environment. There was one standup a couple of months ago who made this fantastic note about it. He was like, I saw this rowdy crowd and I was really nervous to go up there, and then as soon as the standup started you guys just kind of sit down like this. Everyone’s well-behaved when they need to be and rowdy when they need to be. And it just kind of feels like I’m having a fun night with my friends. It feels like a fun game night with my friends.

On the advantages of having different kinds of comedians on her show
As someone who did do standup and doesn’t continue to do it, it’s fun to watch people doing it and see how people of different styles are informed. Like Aaron was a great example of someone who will just kind of sit and kind of rattle off jokes. He probably has a bunch in his rolodex because he does standup all the time. And then Jack for example, who is an old friend of mine, he doesn’t get the chance to do it as much, so his is a completely polished set that he wrote specifically for this. And so it depends. I’ve seen comics on both of those spectrums in this show, and I think it’s kind of a personal preference on a performance end, but I think it’s fun to watch it too, just cause I think standup or comedy in general, when it’s good it’s really really good, and when it’s bad it’s really really bad, and I think everyone can accomplish both. Everyone has a shitty, shitty night, and everyone has a good night, unless they suck. And I haven’t seen anyone suck in this show.

Have you found it’s important to have diversity of different types of comedy that you present?
Absolutely. That’s why I like having sketch in it. Sometimes I will throw improv in it too, and even just different styles of humor. Like having someone who’s a really upbeat silly guy like “Here I am!” and having someone who’s like, “This is dark stuff, and I’m going to do my dark comedy now.” It kind of brings a different vibe to the room, so it’s fun.

What do you like about performing in Astoria?
It truly feels like a neighborhood here. I was living in Manhattan until about December, and Manhattan is like, yeah there’s a bunch of different neighborhoods but it’s hard to pick one and be like, this is my neighborhood and this is what I feel connected to it unless you really have roots there. Whereas Astoria…it almost feels like it’s Williamsburg, without the yuppiness, which might be a little bit changing at the moment. But at the same time, everyone here seems very grounded. It feels like people who live here want to be here, and they aren’t here by circumstance. They’re here because this is a neighborhood that they think is nice, a neighborhood that they want to live in and feel comfortable in, and that’s what I’ve found too. It’s a place where I feel connected, and for the most part I don’t really like Manhattan.

On being able to do shows close to home.
I love that everything is right here. Even with the trains being shut shut down, I don’t have to leave. I can be in Astoria all weekend and be fine…It’s the city’s best hidden secret.

Here is information on the June 28th show of Truth Serum. 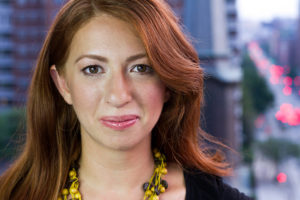 Lisa Huberman is a playwright and storyteller based in Astoria, whose work has been produced throughout New York City and New Jersey. Her full-length play, Sex and Charitable Giving was produced in The Brick Theatre’s inaugural F*ck Fest and was recently recorded for Elephant Run District’s hERD Podcast. Her solo show, The Worst Zionist in the Room, was recently featured as part of Dixon Place’s In the Lounge Series. Lisa is part of the Queens-based artist collective Mission to (dit)Mars and a member of their playwriting group, The Propulsion Lab.

This show is sooooo amazing!!!!!!! Zoe Yellen has been dominating the comedy game since her rumspringa days!