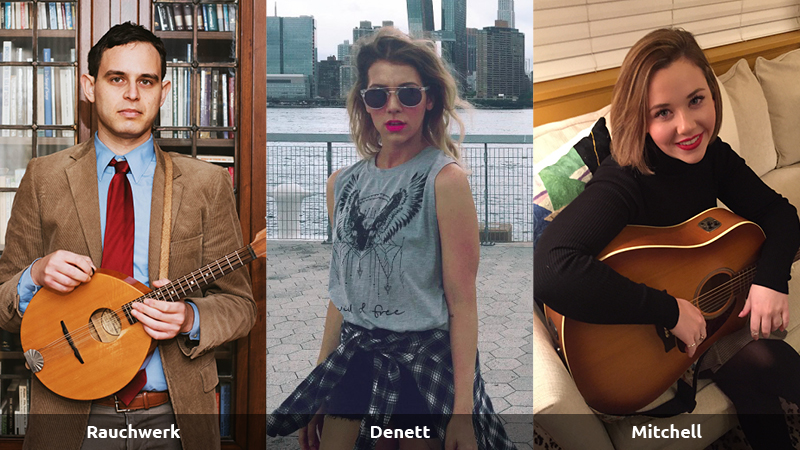 Here is some info about the three musicians performing at BOAST’s Live Music Showcase on Sunday, May 6, 4–7pm. You can find out more about the event and get tickets at boast.nyc/music.

Daniel Rauchwerk
Best described as a “musical Wikipedia,” songwriter, singer, and multi-instrumentalist seeks to educate as he entertains. A founding member of the internationally touring folk band The Lords of Liechtenstein, Dan has recently embarked on a solo career. His debut solo album, “We Are More Than What We Leave Behind,” will be released in late 2018.

Nicole Denett
Nicole is a New York City native, born and raised in Queens. She plays piano, guitar and ukulele and is influenced by the likes of Fiona Apple, Sara Bareilles, Carole King and The Beatles. Her songs are a blend of pop, soul, and jazz infused with a little bit of attitude and a lot of heart.

Christine Mitchell
Christine Mitchell is a singer/songwriter/guitarist from the Jersey Shore. Her musical influences have been Bob Dylan, Justin Townes Earle, Joni Mitchell and John Mayer. Christine has been accepted to Berklee College of Music in Boston and was nominated for the 2018 Asbury Music Awards for Top Female Acoustic Act. She enjoys performing her original music as well as covers.