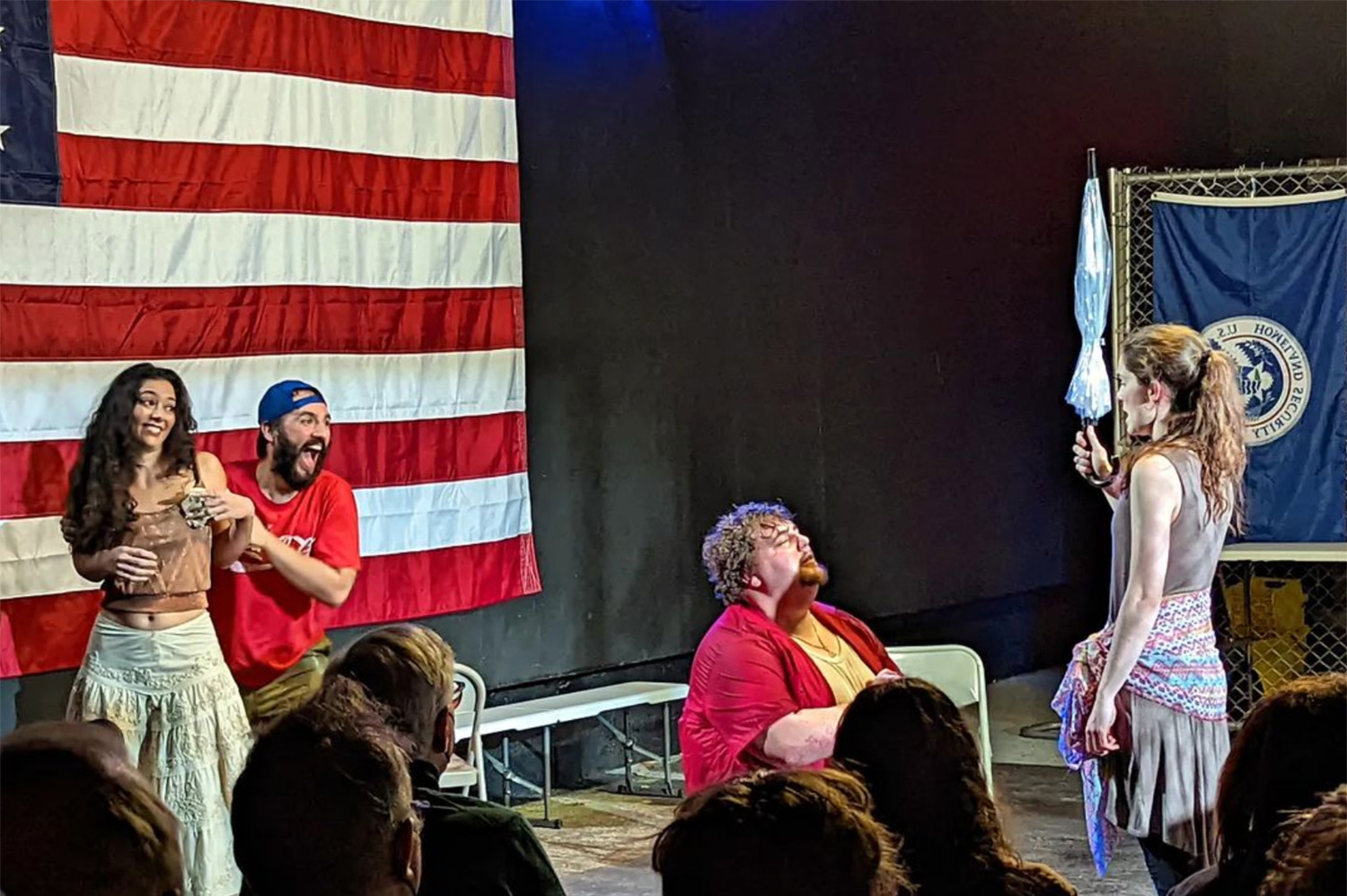 As you enter the space of Astoria Performing Arts Center’s Man of La Mancha, any champion of innovative theater is greeted with that most addictive feeling one can feel in an artistic space: promise. A drab holding cell of the US Border Patrol stands starkly lit, characters—whom we’ve yet to meet—litter the stage, and a lone guitar is plucked expertly by a lead player. These characters, meant to be familiar, are lacking identifying costumery or even their eventual, adopted personas, leaving us to guess who might be portraying whom in this popular tale. Much in the same way, these characters, all with the same dread anticipation and, mostly all, marvelously members of the Latinx community, hold that same curiosity: What story is about to unfold?

This is truly where this production shines; in this spirit of promise and anticipation.

The story of Cervantes’ befuddled hero, Don Quixote of La Mancha, is familiar, and Leigh and Darion’s musical is cherished to all who celebrate the musical theater art form. Tony William II’s production starts strong, presenting audiences with an enticing alternative to the traditionalism that many productions cling to, and quickly dives into the complex and intense.

We all know of Don Quixote, the some-would-call-mad dreamer and Spanish gentleman who fights giants which are merely windmills, dispatches barbers of their shaving-basin helmets, and woos a lowly peasant woman as one would court a princess. In this lovely musical we are invited to see this tale as both told by and performed by the writer of Don Quixote himself, Miguel de Cervantes (played gallantly by JJ Hoss). As Cervantes tells his fiction, we witness the other members of the prison cell transform from despondent to dedicated day players, breathing life to the fanciful story of a man who refuses to accept the grim-dark reality that others demand he see.

In this reworking, the traditional Inquisition-age prison cell is swapped instead for the aforementioned US Border detention cell, and all props and costumery provide a scene reminiscent of a refugee camp. The audience is left, in the end, enthralled from engaging with these immigrants, turned prisoners, and, revealed, most importantly, to be fellow dreaming and yearning human beings. These energized performers—most notably Taïs Szilagi as the fiery and wounded Aldonza/Dulcinea, and Francisco Arcila as the Governor, lead player, and part-time pit instrumentalist—tell this compelling story, but we are still left with many pressing questions: How are these characters within this show within a show being coerced into performing this narrative? What is the fate that awaits these prisoners-turned-players in both their reality and their constructed story? Why is that man shirtless?

The answers can only be sought by attending this enticing production.

Still with all of the questions that come with this story, one cannot help but be wowed by the vocal stylings of the cast. The music of Mitch Leigh deviates strongly from the traditional, western standards of most popular musical theater, offering complex and virtuosic intervals, difficult to discern for those untrained in the cultural stylings of the melting pot that is Spain. Yet—with another nod to Taïs Szilagi and note to our Don Quixote, JJ Hoss—every cast member pulls out the stops, bringing strong conviction and tonal clarity to every number.

It is with great thanks to these performers—lead, again, by JJ Hoss and a, surprisingly quixotic and highly erratic Sancho, played by Anthony Martinez—that this show finds its heart. Each member gives their earnest love and skill in continuing to reel in the audience with their commitment to a story that, in fiction or in present reality, need not remain an impossible dream for anyone who seeks to dream it.